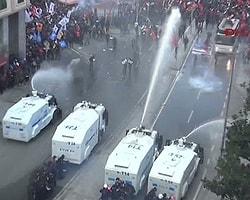 The death of Burak Can Karamanoglu follows Tuesday death of Berkin Elvan, 15

Berkin died nine months after he was wounded, apparently by a police tear gas canister

Istanbul (CNN) -- Thousands of mourners gathered Thursday for the second mass funeral in two days after a 22-year-old Turkish man died from a gunshot wound.

Crowds carrying Turkish flags escorted the coffin of Burak Can Karamanoglu through the streets of Istanbul. His death Wednesday increased tensions in a country riven by deep political polarization in the run-up to municipal elections scheduled to take place nationwide on March 30.

The Istanbul governor's office issued a statement explaining that Wednesday night, Karamanoglu "lost his life as a result of a verbal argument between two groups that escalated into a fight where a gun was used."

Two other men received gunshot wounds, the governor's office said. Neither of the wounded was in critical condition.

It is not clear which groups were involved in the fight that led to Karamanoglu's death. But the violence took place amid clashes in nearby streets between riot police and mourners who had attended the funeral of 15-year-old Berkin Elvan on Wednesday.

Berkin died in an Istanbul hospital this week, nine months after he was critically wounded, apparently by a tear gas canister fired by riot police.

The boy's death triggered a massive outpouring of grief and discontent, as demonstrators in several Turkish cities blamed the death on the Turkish government and excessive police force.

"I am addressing the Prime Minister. If he wants, he could bring the murderer of my child to me in one hour," Sami Elvan told CNN sister network CNN Turk.

He went on to criticize Erdogan for refusing to discuss the death of his son or of six Turkish men who have died since anti-government protests erupted in May 2013.

In a worrying sign of growing political tension, the father of Karamanoglu -- this week's gunshot victim -- lashed out at the crowds of mourners who clashed with police after Berkin's funeral.

"There wasn't a place, a storefront they didn't damage. They burned and destroyed everything," said Halil Karamanoglu, in comments published by the state broadcaster TRT.

"I am hurting right now. Take pity on this nation, take pity on these children. Common sense ... we have to be united," he said.

But at a public appearance Thursday, Erdogan drew attention to Karamanoglu's shooting death. He blamed the killing on the protesters who criticize his government.

"Yesterday, unfortunately, they killed a youth that had just returned from military service. What are the people expressing sorrow yesterday going to say about this child of ours?" Erdogan said, according to the semiofficial Anadolu news agency.

Part of complete coverage on

Here are answers to some of the most frequently asked questions about this baffling disappearance.

As investigators search for Malaysia Airlines Flight 370, analysts try to figure out why the high-tech plane's transponders were disabled.

A CNN team joins international observers trying to get into Crimea from Ukraine -- here's what they saw.

Watch how Pope Francis is redefining the papacy and breathing new life into the Catholic Church.

Browse through images you don't always see on news reports from CNN teams around the world.

Michael Oren: He says the question is whether a truce can prevent conflict from becoming conflagration.

There's nothing like lying on your back and staring up at a field of glittering stars. Here's where you can go for that:

The Fukushima nuclear disaster changed global attitudes towards nuclear power. Explore our interactive to find out how.

You -- the person now reading this story -- can help experts solve the mystery of what happened to Malaysia Airlines Flight 370.

Scientists around the world are investigating whether living cells can be used to print replacement organs and tissues.

An adventurer explores Japan's abandoned sex museums -- some of the things he finds are "very, very weird."

There are two Web clips featuring Beyonce that have been getting a lot of attention.